Time flies and the past 2 months were really a long longggg time for me here at Jubail, away from my wife and kids. But sometimes, it is good for you to sort of isolate yourself to ponder  and to look at yourself in the mirror. Rasullullah SAW himself had also isolated himself from the menace of Arabic Jahilliyah to be closer to Allah. 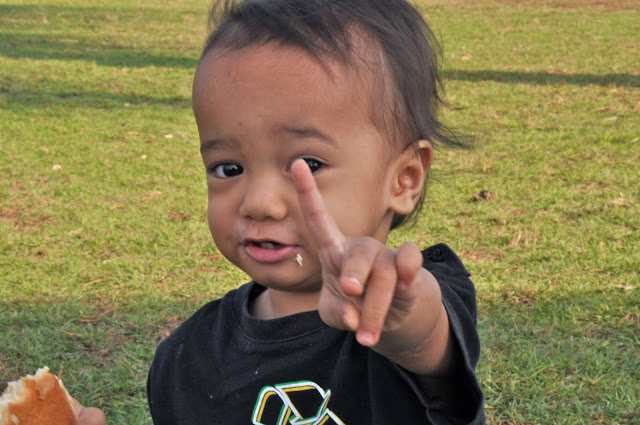 As the above picture of my boy indicates , there is just one more working day before daddy return to Malaysia...  InsyaAllah, this year we plan to go for Penang side, since the past 3 years we celebrated the 1st day of raya in Klang.

As anticipated, I am currently holding a record against myself about my weight . It's down from 101.6kg to 92.6kg in 2 months.  That 's is my 5 year all time record low ! Strict diet, no rice and combined with exercises in between. Alhamdulillah, it is actually boils down to a simple equation as follows:

Well, there is a saying that says " life is a roller coaster so just take a ride" . When I heard the official news today, I was not entralled nor surprised, since this kind of rumors had been going on since 1998 . There it is, after 43 years of operation, Esso Port Dickson Refinery,  has been sold off  by ExxonMobil to San Miguel Corporation  from the Philippines today.  The refinery has been operating with ups and downs since 1963.

I simply have to write something  to pay a tribute to Esso Port Dickson Refinery since I have had a lot of sentimental values with it.

It all started in 2005, when I changed my career path from a mundane electronics manufacturing and RND industries to oil n gas stuff. I had never thought that I would ended up in a quiet Port Dickson town, where one can tour the town in  2 minutes and  be done.

I must say that working with Exxon was really a great pleasure during my recent 5 years stay there. That was the place that were full of opportunities and hands-on knowldege , whereby one had to do every single thing from scratch. One has to be the planner,  the presenter , the executor and  the manager  to get any job done. This has provided huge benefits and hands on experience to me, coupled with a few great ExxonMobil EMRE Materials Corrosion and Inspection specialists that served me as my great mentor. Till now, I am keeping in touch with all my EMRE gurus for all their previous advise and guidance

Being just a small refinery, compared to all other rivals in Malaysia,  I realized that one can be very close with all the staff around as you will see familiar and similar faces all around you.  Small refinery has huge advantages since you can cut out all the crooked-head bureaucracy stuffs and get straight to the issue/person in no time. I remembered those times when I just walked into the Refinery Manager's office to have discussion  with him like nobody's business. Cut the crap, straight to the point stuff.

And this was also the place where my wife works, in the same Reliability Engineering Department, reporting to the same boss with our office separated by  solely 10ft. A lot of  people out there think that having your spouse working  together in the same company is really a bad idea. However, I found it the otherwise.  I was really grateful to Allah for this blessings since there were so much pros over the cons. All the sentimental memories are still remained intact in my head. Too bad it was just for 5 years there for us.  I wish it could have been much longer.

What I really like about this company?  Well... It was about its solid business systems and principles (until you just don't know how the heck to implement it sometimes while scratching your head).... its strong controls until you are rest assured that you are doing the right thing , the right time..... its  great networking with other affiliates where you exchange knowledge......its nice business trips and travels/training  where I can eat what I want in expensive manner.....its 5 star hotels stays during  business trip........its people.....and of course, its never ending initiatives that make you grow !

Well, like I said in the beginning, life goes on and I had decided to move on abroad in Saudi Arabia  as  expats in June 2010. Once all my goals are achieved here , we will definitely move on to another place InsyaAllah. Life is too short for us so maximize and balance it.

Hope that this new management will offer huge opportunities to all my colleagues and friends that are still working  there.

All the best from the Ex-Chief Inspector    :)

Thank You For Visiting!